Qwordle
Welcome to Wordle's Quantum version! In Qwordle, you have six chances to guess any one of the two words in the entangled pair.

Qwordle
Welcome to Wordle's Quantum version! In Qwordle, you have six chances to guess any one of the two words in the entangled pair. 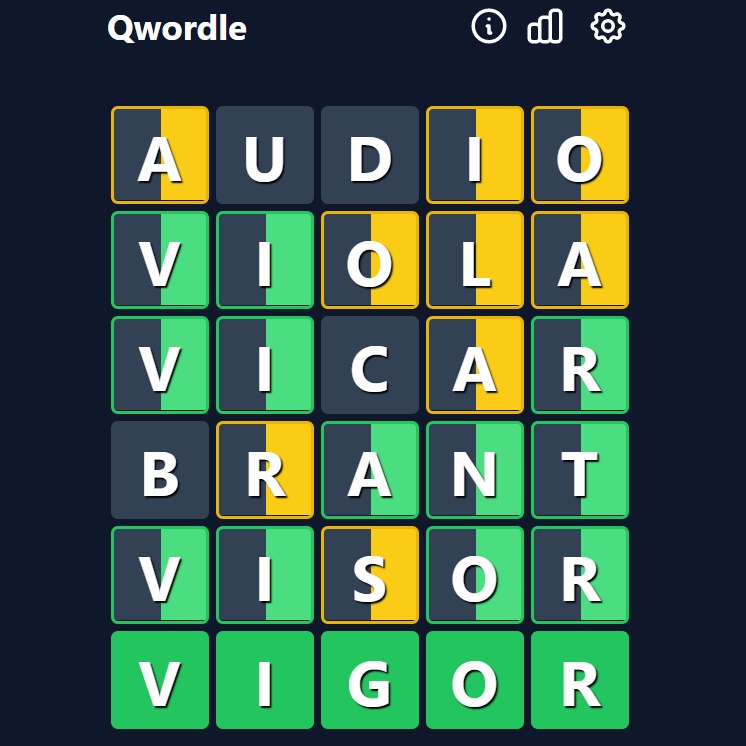 Welcome to Wordle's Quantum version! In Qwordle, you have six chances to guess any one of the two words in the entangled pair. It's a lot like regular Wordle, but there are two words on the screen at the same time that don't share any letters. Your guesses will be half-shaded if they contain any letters from both words, so you'll never know which word they belong to. Still, you only get six chances, so it's definitely more challenging.

Special rules of Qwordle based on quantum mechanics are applied to the colored tiles:

Classical case: If the letters in your guess match those in exactly one of the entangled-two pair's words (either one), you will see all of the colored tiles filled. But there's no way to tell which of the two words in the pair fits your guess. This is like a deterministic measurement of the word in the pair that is closest to the other word.

For instance, if the hidden words were MUSIC and WALTZ, the guess (WEARY) is the closest match to WALTZ. The letter W is in the right place, and the letter A is in the wrong place. Since the letters you matched are all in the same word (WALTZ), you'll see full tiles for the whole guess.

Quantum case: If your guess matches letters in both words of the entangled pair, you will see half-filled colored tiles for the whole guess. Like the last set, these tiles don't show which letters belong to which word in each pair. It is like taking measurements over and over of multiple almost identical tangled pairs and getting different results each time (duality).

If the hidden words were MUSIC and WALTZ, the guess (TAXES) would have letters from both words. The letter A is where it should be, but the letters T and S are in the wrong places. Since the letters that match belong to different words, you will only see half-filled tiles for the whole guess (indicating interference and ambiguity).