Word500
Word500 is a difficult word game with clues that tell you how many correct letters there are but not which ones they are.

Word500
Word500 is a difficult word game with clues that tell you how many correct letters there are but not which ones they are. 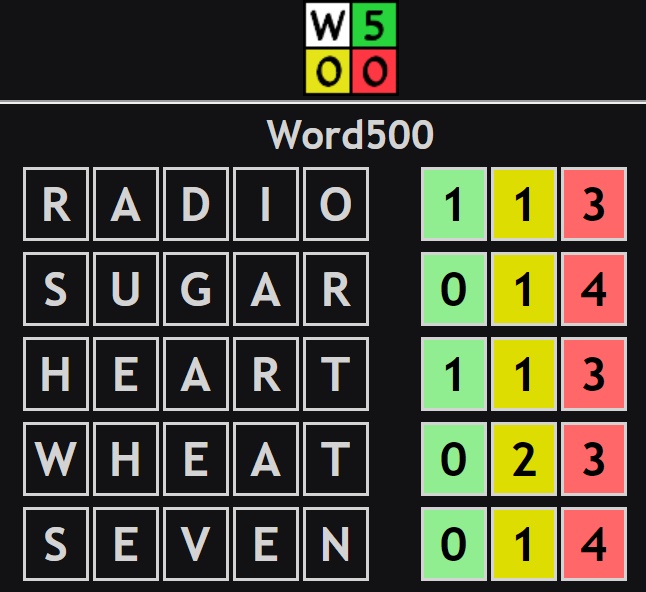 Word500 is a difficult word game with clues that tell you how many correct letters there are but not which ones they are. It works like Wordle and tells you which letters are good, which ones are bad, and which ones are in the wrong place. It will only tell you HOW MANY and NOT WHERE they are.

You have eight tries or less to figure out the secret word. After each guess, the three colored tiles on the right (green, yellow, and red) will tell you how close you were to the secret word.

"STARE" has two letters from the secret word, but they are in a different place. The secret word is missing 3 letters.

"PRINT" has one right letter in the right place, two right letters in the wrong place, and two letters that don't belong in the secret word.

The "_" letter can't be used to make a word, but it can be used to skip a letter while you look for the next letter. You can use the "Hint" button if you get stuck. Do you think you could say no?

Word500 can be played in 3 levels of difficulty and 8 different languages. Catalan, English, French, Spanish, German, Dutch, Italian, and Portuguese. At the Standard level of difficulty (green smiley), the secret word can't have letters that are used more than once (like ORDER), and some letters are left out.

Each language and level of difficulty gets a new secret word every day. There will be six chances for each player to guess the right word. This means that your first five guesses can help you figure out which letters are in the word and where they are. Enjoy!