Symble
Symble is a code-breaking logic game made by Daniel Baamonde. It's similar to Wordle, but the clues are harder to figure out. The goal is to figure out the 5-letter secret word in eight tries.

Symble
Symble is a code-breaking logic game made by Daniel Baamonde. It's similar to Wordle, but the clues are harder to figure out. The goal is to figure out the 5-letter secret word in eight tries. 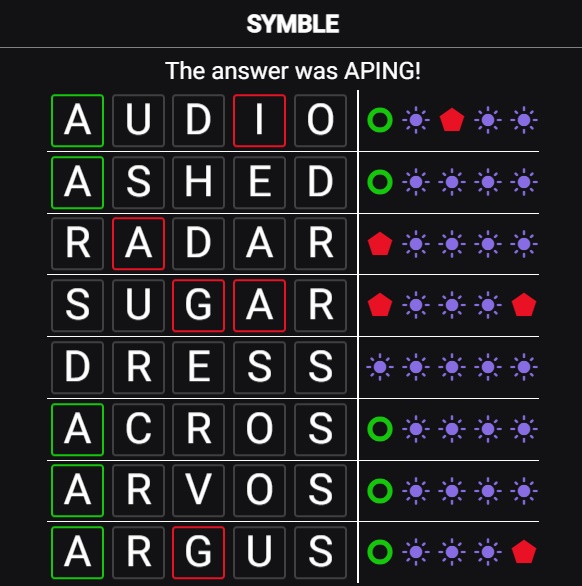 Symble is a code-breaking logic game made by Daniel Baamonde. It's similar to Wordle, but the clues are harder to figure out. The goal is to figure out the 5-letter secret word in eight tries.

Using the first of the three icons at the top right of the page, you can choose from five different game modes.

In the Daily Puzzle, everyone gets the same word, and it changes at midnight in your time zone.

In "infinite mode," you can play as much as you want, and each time, random words will appear.

You are up against the clock in 5 Minute Blitz. In 5 minutes, how many Symble puzzles can you solve?

Live Blitz Battle is the toughest Symble game you can play. You can play live 5 Minute Blitz against a random opponent or a friend of your choice. Average guesses are used to break ties in the number of words solved. Become the ultimate Symble player!

In Custom Puzzle mode, you can make your own Symble puzzle by choosing any 5 letters to be the answer. When you make the puzzle, a special URL with your custom puzzle in it will be copied to your clipboard. Share it with your friends to see if they can beat it.

From the menu in the middle icon, you can share your game results with friends and see your statistics. Symble's strategy and gameplay are very different from Wordle's.

Every time you play Symble, you'll get three symbols that mean something different. When you try to guess a word in Symble, you will be shown a series of five symbols on top of an invisible version of the secret answer. Each symbol corresponds to the letter that is directly under it in the invisible answer. It's worth saying again: the symbols match up with the letters in the answer, not the letters in your guess.

The next example shows what each of the three types of symbols can mean. Keep in mind that the answer is shown over the symbols only to help you understand how to play. In a real game, the answer would not be shown. Let's say that SHAKE is the answer to a Symble puzzle. You don't know this yet, so guess the word "THICK." You can see the five symbols in the picture below.

The first symbol is the same as the letter S in SHAKE. It means "the letter I'm covering is not in your guess," since your guess of THICK did not include an S. The other two symbols, which correspond to the letters A and E in the third and fifth spots of SHAKE, are the same.

The fourth symbol is the same as the letter K in SHAKE. It means "the letter I'm covering is in your guess, but not in the right place," since your guess of THICK had a K in the wrong place.

When you start a Symble puzzle, of course, you don't know which symbol stands for which idea, nor do you know which letters of the answer the symbols stand for. You have to use your deduction skills to figure out what each symbol means and then use that information to find the secret answer.

Use this example to help you understand the rules, and then give it a try. Don't give up if you find it hard, and best of luck!