Mickeyrdle
Mickeyrdle is a Disney-themed word game that was inspired by Wordle. Five-letter Mickeyrdle answers are from Disney-related sources.

Mickeyrdle
Mickeyrdle is a Disney-themed word game that was inspired by Wordle. Five-letter Mickeyrdle answers are from Disney-related sources. 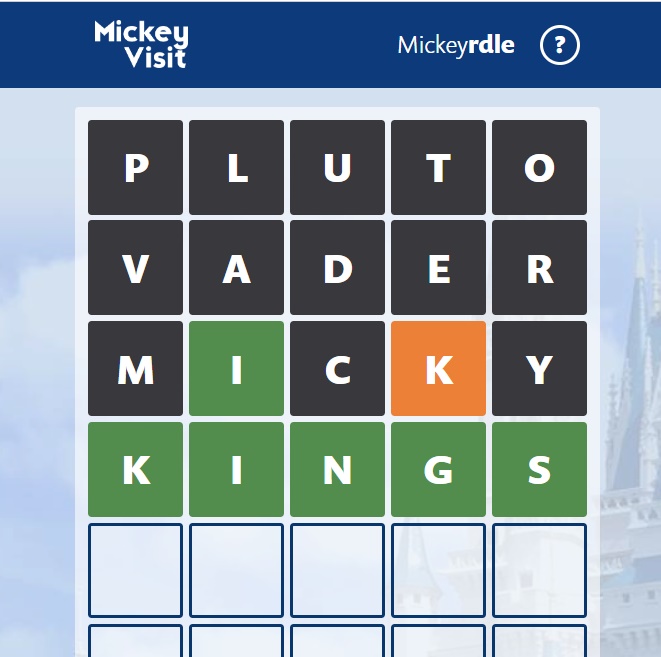 Mickeyrdle is a Disney-themed word game that was inspired by Wordle. Five-letter Mickeyrdle answers are from Disney-related sources, such as the names of characters, rides at theme parks, or a fact that only real fans would know. Remember that Pixar, Marvel, Star Wars, the Muppets, theme parks, cruises, and more are all part of the Disney universe. The more you know about Disney, the better you'll probably do.

Like Wordle, Mickeyrdle is a puzzle that you have to solve in less than six tries. To get started, just type in the name of any Disney character you choose. After that, the boxes' colors will change. If the box turns green, the right letter is in the right place. If it turns orange, the right letter is in the wrong place. If it turns black, the wrong letter was entered. After getting clues from the colors of the boxes, you'll eventually figure out the hidden Disney word.

If, after six attempts, you are unable to guess the mystery Disney word, simply reload the page and you will be allowed to begin again. Players can play a new game after finishing Mickeyrdle's game for the day. Mickeyrdle game is pretty hard, even if you are a big fan, because there are so many characters, places, and people to choose from. Even if you're not a huge fan of Disney, having more Wordle puzzles to solve is always a good thing.

There are even Wordle-based games for Taylor Swift fans called "Taylordle" and "Wizarding Wordle" for Harry Potter fans.