Adverswordle
Adversary Wordle, or Adverswordle for short, is a reverse version of Wordle: A bot guesses a five-letter word that you think of.

Adverswordle
Adversary Wordle, or Adverswordle for short, is a reverse version of Wordle: A bot guesses a five-letter word that you think of. 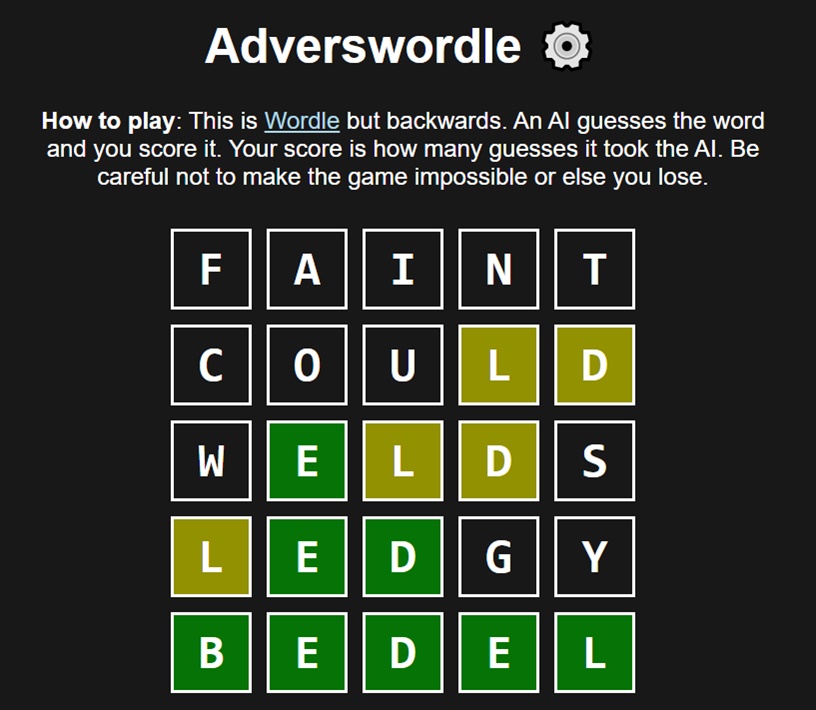 Adversary Wordle, or Adverswordle for short, is a reverse version of Wordle: A bot guesses a five-letter word that you think of. When the game gives an answer, the player clicks on each letter to show if it's in the right place, in the wrong place, or not in the word at all. The AI learns from each result and changes how it works. Adverswordle awards points based on the time it takes the AI to guess each player's word, unlike other Wordle clones that require players to pass or fail. This is a fun game if you want to take a break from guessing once and be the mastermind for a while.

Now you have to think of a word. Try to think of a word that isn't very well known and is hard to guess. This word is a real one. As long as the word has five letters, you're good to go. Next, the AI or computer will make guesses, and you will have to write down which letters are right and if they are in the right place or not. If the computer or AI guesses the right letter in the right place, turn it green. But if the right letter isn't where it should be, it will turn yellow. It's just that in Wordle, the roles are switched. Once the computer correctly guesses the word, the game is over. The final score is based on how many times the computer guesses the correct answer. The score goes up as more guesses are made.

Adverswordle, on the other hand, has no restriction on the number of guesses it can make, unlike Wordle. So, your goal isn't just to beat your opponent in fewer than five tries. Instead, you're trying to see how long you can keep the AI guessing. Since there are no limits on what can be used as a reference, it is only a matter of time, or guesses, before the AI guesses the right word. Be careful, because if you try to make up words or trick the system, you will lose right away. So, be honest!

Adverswordle can be played once a day, much like Wordle. You may also share your scores directly on social media platforms such as Reddit and Discord after playing.

For example, if you type "TRIAL," the AI will guess "BIRDS." You must click "submit" after putting a yellow mark on the "I" and "R." Then, Adverswordle's AI might guess "THEIR," and you would respond by marking the "T" in green and the "I" and "R" in yellow. The AI then says "TRIAL," and you mark all the letters as green. Then, you will get 3 points because the computer had to try three times to get it right. The AI has an unlimited number of guesses, and the person who made it said they got a high score of 12. Enjoy!